Great news on the home front, it seems like everywhere we turn there is GREEN news linked to the 2010 Olympics. Our goal to be the greenest Olympic is definitely ours! With the intent to become the green envy of eco-mind Olympic we are making headlines everywhere.
"The 2010 Winter Olympics Athletes’ Village will be built to a remarkably high level of sustainability and meet the LEED standards." 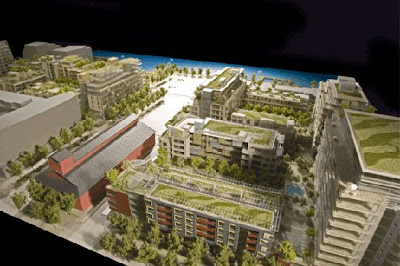 This will be the third Olympics hosted by Canada, yippee! Taking place in beautiful Vancouver where both the Olympic and Paralympic Games will be organized by the same committee, VANOC. The details that have gone into creating the two villages that will host both games are extraordinary well planned with the environment on the forefront. 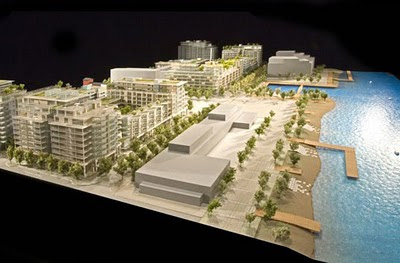 "Vancouver’s Southeast False Creek area (Vancouver Olympic and Paralympic Village), and the other one within the scenic Cheakamus Valley (Whistler Olympic and Paralympic Village).
The Vancouver Olympic Village in the Southeast False Creek area will be completed during the first phase. The village will have 16 buildings constructed on an area of 1.4 million square feet, and a community center. All the buildings will be built to LEED Gold standard and the community center will be built to LEED Platinum."
As well,
'All of the buildings will be fitted with solar panels and feature green roofs. Rain water will be harvested and be used for the irrigation of the green roofs and landscaping. In-slab hydronic system will be used for heating and cooling of the buildings, and the latent heat of sewer pipes will be harnessed by an innovative heat exchange system. All parking will be underground, and plans are afoot to achieve water neutrality as it will collect as much rain water as it uses. The two villages will be connected through latest and state-of-the-art communication technologies, and athletes will travel conveniently between the two. The Vancouver Olympic and Paralympic Village will have the capacity to house 2,100 athletes and officials; and the Whistler Olympic and Paralympic Village will accommodate 2,400 athletes and officials. After the games the villages will serve as valuable legacies, and will be developed as models of sustainable community and sustainable living." http://www.inhabitat.com/2008/07/10/2010-winter-olympics-going-green/
I am so proud of this forward thinking that the environmental moment is the only way to move forward and claim a true name in the world. Keep up the great work, this step forward will make the next steps larger as future Olympics from now on will be trying to out due Canada on the GREEN front, nothing is better then a great competition in making the world more GREEN.
Stay green my friends!
Until next time,
w&c designer girl!
Posted by { whitewash & co } at 2:07 PM

Thank you so much for your comment!
From your friend,
environmental designer home-furniture - whitewash & co